What’s Happening Upstream – Above the Dam

“After the U.S. Environmental Protection Agency reviewed Pennsylvania’s updated plan to address pollution reduction goals for the Chesapeake Bay watershed, it found that the plan falls short of those goals largely due to the lack of resources provided by the state. Approximately 25,000 miles of streams in the state – more than the Earth’s circumference – are considered unsuitable for fishing, recreation or other uses.”

“What’s missing are improved manure control policies and dependable state funding for agriculture cost-share programs for farmers. These are measures other states have had for a long time.”

“Pennsylvania will now have 90 days to submit an improved final plan that meets its targets.  Starting this week, EPA will be taking stronger actions statewide to promote clean-up progress, such as increased agriculture and municipal stormwater inspections, increased permit oversight, heightened enforcement actions and a redirection of certain federal funds to ensure they are spent more efficiently in Pennsylvania.”

All quotes from EPA article cited above

On December 14th 2019, the U.S. EPA released its evaluations of the Final Phase III Watershed Implementation Plans (WIPs) from Delaware, Maryland, New York, Pennsylvania, Virginia, West Virginia, and the District of Columbia to reduce nitrogen, phosphorus and sediment pollution to the Chesapeake Bay.

The EPA is taking no enforcement action against Pennsylvania, whose Phase III WIP has been heavily criticized by downstream states and NGOs for being feckless on nitrogen reductions, underfunded and out of sync with PA county plans.  The EPA gave another pass to the state (PA) with the largest pollution loads to account for within the Chesapeake Bay, which does not bode well for protecting Maryland’s ongoing efforts and investments downstream.

While the state of Maryland aggressively implements the flawed Bay TMDL (pollution diet) through costly mandates on local governments and increased taxes and fees, our upstream watershed neighbor and largest source of Bay pollution fiddles.  Reports of significant progress in the Commonwealth of Pennsylvania towards reducing pollution in the Susquehanna River that ultimately finds its way into the Chesapeake Bay are isolated and overstated.  The media accounts listed and linked here highlight just how little progress is being made above the Conowingo Dam to save the Bay.  As you review these articles or any account of environmental problems with the Susquehanna River, be ever mindful of these basic facts:

The Susquehanna River – too big to ail?
June 17, 2013, Patriot-News Editorial Board, Penn Live

For a collection of articles on the issues involved above the Conowingo Dam, click here for Lancaster Online’s relevant database.

The Pennsylvania Fish and Boat Commission has zealously advocated for an increase in restoration efforts of the Lower Susquehanna’s water quality.  Click here to visit their website to gain insight on this issue, including efforts by the PFBC to engage their fellow Pennsylvania and federal partners. A satellite view of the Susquehanna River near Harrisburg, PA, on September 10 shows the high levels of sediment that are being carried toward Chesapeake Bay. Courtesy: Advanced Land Imager (ALI) on NASA’s Earth Observing-1 (EO-1) satellite.

The Stewards of the Lower Susquehanna, joined by the Waterkeepers Chesapeake, a coalition of 18 conservation groups throughout the Chesapeake Bay region, petitioned for intervention with FERC for the Conowingo Dam relicensing.  The Stewards of the Lower Susquehanna’s, joined by the Waterkeepers Chesapeake, motion to intervene can be seen here.  The article below provides a summary of their filing: 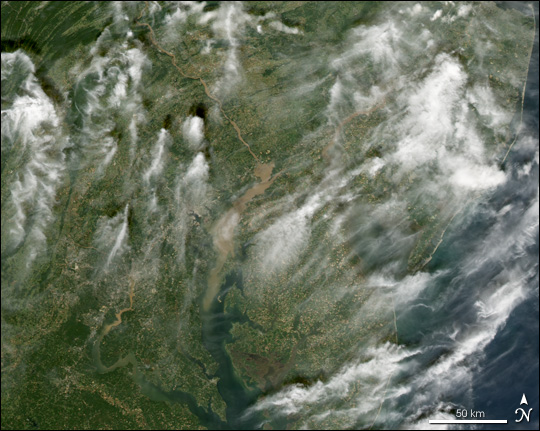 Flooding in the Susquehanna River Watershed

Courtesy of USGS “Sediment Sources and Transport in the Chesapeake Bay Watershed”.