EPA Looks to Roll Back Wetlands Protections
The Star Democrat

An Island in the Chesapeake Bay is Eroding, and a UMB Researcher is Trying to Save It
The Diamondback

Part of the Answer to Climate Change May Be America’s Trees and Dirt, Scientists Say
New York Times

Editorial: The Chesapeake Bay’s Environmental Success Story is in Danger
The Washington Post

“In Another Decade or Two, We’ll See a Different Chesapeake”
Bay Journal

Wetlands Will Survive Rising Seas, But Only if We Let Them
EurekAlert!

Hurricane Florence, Already a Monster, is Due to Strengthen as 1 Million People are Told to Flee the US Coast
CNN

A New Mapping Effort Will Provide a Closer Look at the Streams that Feed the Chesapeake Bay
Technical.ly

Port of Baltimore Honored for Environmental Efforts
The Daily Record

16 August 2018
https://www.youtube.com/embed/LvK86Ripmc4Today marks the second day of the Maryland Association of Counties (MACo) summer conference, the focus of which is “Water, Water Everywhere” and presentations revolve around the health of Maryland waterways. Topics pertaining to infrastructure, treatment and regulations are being explored over the course of the four-day event. The Clean Chesapeake Coalition (CCC) is currently comprised of government officials from six Maryland counties: Caroline, Carroll, Cecil, Dorchester, Kent and Queen Anne’s. The Coalition’s objective is to pursue improvement to the water quality of the Chesapeake Bay in the most prudent and fiscally responsible manner – through research, coordination and advocacy. Since its inception in 2012, Coalition counties has fought to bring attention to the largest single point source of pollution to Bay waters, the reservoir behind the Conowingo Dam in the lower Susquehanna River.

Exelon, current owner of the Dam, is in the process of seeking a new, 46-year license from the Federal Energy Regulatory Commission (FERC) and, as part of that process, Section 401 of the federal Clean Water Act requires that the state of Maryland issue a Water Quality Certification (WQC) for the Dam. On April 27th of this year, the Maryland Department of the Environment (MDE) did indeed issue the WQC, with special conditions – conditions that Exelon is now suing Maryland over in two courts and administratively. Exelon maintains that the Dam is not a source of pollution and that the conditions imposed by the State are impracticable and illegal.

While it may be true that the Dam does not itself create pollution, CCC contends that its operations have a severely negative impact on the health of the Bay and that the 14-mile reservoir behind the Dam, also the responsibility of Exelon, must be properly maintained so that the downstream cleanup progress made to date is not wiped out by the next major storm event. Most people are familiar with the damage caused by Hurricane Agnes in 1972 and Tropical Storm Lee in 2011 (among other high-profile storms). Now, the recent extensive coverage of the debris following storms in late July of this year has brought needed attention to the greatest imminent threat to the health of the Bay. The Coalition counties, however, did not need this ongoing disaster to remind them that the Conowingo Factor is crucial to the conversation about restoring the Bay. Earlier this year they commissioned a video, follow-up to their 2014 video, in order to help raise awareness and guide the discussion as FERC considers the re-license and Exelon decides whether to pick up the mantle of Bay stewardship.

While multiple environmental NGOs are saying that it will be months before we will know the impact of July’s storms on Bay restoration efforts, previous scientific studies offer several facts that are alarming even before we know the extent to which debris and sediment hurt oysters, crabs, submerged aquatic vegetation (SAV) and other important marine plant and animal life. What do we know already?
•    The USGS reported that when Exelon opened 20+ spill gates on the 26th of July, 2018, the river flow exceeded 400,000 cubic feet per second (cfs).
•    At 400,000 cfs, at least two (2) million tons of accumulated sediment is scoured from the Conowingo Reservoir and dumped into the Upper Bay. This represents 133% of the average annual sediment load from the Susquehanna River…in a few short days.
•    For every 1,000 tons of sediment that comes from behind the Dam, an estimated 21 tons of nitrogen and 1.7 tons of phosphorus come with it.1
•    Therefore, a conservative estimate of the amount of nitrogen and phosphorus that loaded into the Bay in shock proportions over a several day period last month is 42,000 tons of nitrogen and 3,400 tons of phosphorus.
•    To put this in perspective, the US Environmental Protection Agency’s (EPA) recently released Phase III Watershed Implementation Plan (WIP) planning targets include 45.78 million pounds of nitrogen per year (approximately 23,000 tons) for Maryland. In other words, over the course of several days late last month, two times the annual target for all of Maryland was loaded into the Bay at Conowingo.

During the recent midpoint assessment of the Bay Total Maximum Daily Load (TMDL), aka pollution diet, the EPA made a bold decision – they agreed to develop an additional WIP specific to the Conowingo Dam. This calls for the watershed states, the District of Columbia and Exelon to formulate a plan to deal with this threat. Yet Exelon has repeatedly stated that their renewable energy plant should not be held responsible and points to the upstream states as the culpable parties. While there is no doubt that we all have a ways to go to meet TMDL goals, the Dam represents a ticking time bomb for past, current and future efforts that cannot be denied, downplayed or ignored.

Other environmental groups have called the Conowingo Dam a “red herring” and suggested that CCC members are simply trying to shirk responsibility for reducing local pollution.  This is simply not true, we have never said that this is an either/or proposition. What we have said, and hope to make clear from our latest video, is that in the event of another big storm (a 25-year storm has an 80% chance of occurring during the re-licensing period sought by Exelon), the billions that have already been spent to improve the quality of our country’s largest estuary will be washed down the proverbial toilet.

1 Ratio calculations based on Table 4-9 of the Lower Susquehanna River Watershed Assessment, USACOE and MDE. 2015.

The Clean Chesapeake Coalition wrote a letter to Gov. Hogan regarding his recent re-election as Chairman of the Chesapeake Bay Executive Council and expressing concern that the Chesapeake Bay Commission’s executive director is downplaying the impact of the Conowingo Dam on Bay health.

The Secretary of the Department of Natural Resources and the Secretary of the Environment wrote a letter to the Exelon Generation CEO requesting help with cleaning up the debris from July’s storms.
Maryland Officials Ask Conowingo Dam Owner Exelon to Help in ‘Critical Moment’ for Chesapeake Bay Pollution

At 8:30 this morning, the USGS was reporting the gage height at 22.45 feet; flood stage is 23.5 feet. You can be sure we’re monitoring this issue through all available means, including NOAA’s National Weather Service. 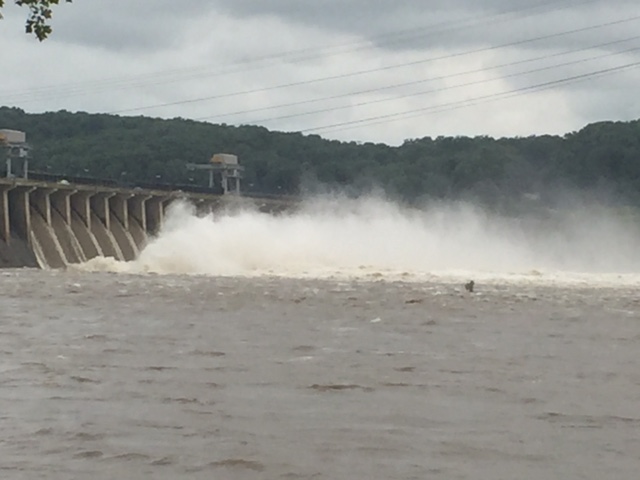 Photo Courtesy of Chip MacLeod. Taken at noon on July 25, 2018 at Conowngo Dam.

Oligotrophication! A Big Word for Even Bigger News, a Bay Comeback
Bay Journal

Cambridge is for Clean Water
The Star Democrat

By the Numbers: 1,700
Chesapeake Bay Program

Board of Public Works Approves Funding for Clean Water and the Chesapeake Bay
Maryland Dept. of the Environment

The Interdependence of Land and Water Protection
Saving Land

Data the New Driver in Conservation Decisions Regarding Bay
Governing

Why Environmental Impact Bonds are Catching On
Governing

Op-Ed: Where are CBF and CCA?
Chestertown Spy